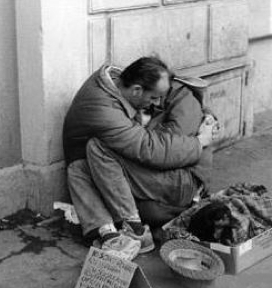 Mister Rand has been feeling despair concerning the future of his species and the earth itself, mainly due to manmade pollution brought about by centuries of industrial greed. He observes the rioting and savagery of those his fellow humans who operate on the consciousness levels of To Force, To Threaten, or To Blame.”I just don’t want to be here any more,” says Mister Rand. He does not wish to live in a world where Love does not rule.

Mister Rand longed for this since he was a child. His parents, wounded by their own pain, gave what love they could, but did not keep him safe either from themselves or [two of] his siblings. And so he began to eat to cover the pain. Other sensitives in his family used alcohol for the same purpose. Many sensitives do. Instead of turning to one another for protection and consolation, they withdrew within their own hearts, decided love not only did not exist for themselves, but that Love did not exist in the world Out There as well. As we see it much of atheism is a coping response to the pain of early betrayals by those whose task was to protect, guide, and console. Much religion is such a coping response as well.

What then is the truth of things? Is Divine Love real? Are Mister Rand’s visions of Divine Love psychological pathologizing? Wish projections from a bereft spirit? This is what Mister Rand wrote last night on Facebook:

“I just came through one of the darkest days of my life, where all love and meaning seemed to drain away from everything, and all seemed hopeless. People showed me love, but I hid what was happening to me, and it didn’t begin to pass until I told 2 people the truth. No more lies. We are in a war of shadow and light, and only light and love can win it. God give me the strength to face my shadow with light fueled by love.”

May all those in despair find the door to Love. And we thank you for sharing. •

One thought on “A Message From “The Family”: On the Triumph of Love”