Today, January 27th, is the anniversary of the day I found you dead on your bed in 1988. My elderly cat has been sick, and though I love him dearly and will miss him terribly when it is his time to pass, my weeping was so intense today, and my feelings of guilt and shame so pronounced, that I knew what I was feeling had to be about earlier losses, too. Hence this letter.

It’s not the only letter I’ve written to you, by any means; for years I struggled with the persistent notion that I could have saved you from your suicide; that somehow you had killed yourself because I had failed as a partner and lover. Now, so many years, therapies, 12 Step programs, and heart-openings later, I know that your story was not my story. Had I opened the door that night at 10pm when I returned from work to find the light on under your door, I might have delayed your death, for the coroner told me you had died around midnight that night. But in the end, if death is what you wished for (and your ex-wife told me over the phone you had attempted it before, during your marriage to her), you would have found a way to hasten it. After all, a month before you died you warned me what was going to happen.

We were in the car going somewhere, you driving, me in the front passenger seat. You said, “I had a funny dream last night. I dreamed we were in a hospital room. I was lying in bed in a coma, and you were sitting on the chair next to the bed. And I knew that you were all right with my condition, because I’d told you many times that the place where I go when I do deep trance is so beautiful that some day I may not want to come back.” Maybe it was that dream (if it was a dream and not your way of hinting what was to come) that prompted me on some level to realize our time together remaining would be curtailed, for it was in mid-January that I sprung on you that surprise birthday party, where all our friends gathered, and we played a game, and you had cake, and laughed, and said, “No one has ever had a birthday party for me before.” Less than two weeks later you were dead.

My inner child has always been terrified of death. Death, in fact, is my Life Theme, the greatest truth this incarnation of mine has been learning to accept, assimilate, and adapt to. Maybe that’s one reason I was attracted to metaphysics after my rationalist upbringing and my ensuing 7 years as a Fundamentalist Christian—I sought to find evidence that the body is not all of us; that physical death is not the death of something deeper and more core in us; and that somehow Tarot, trancework, channeling and so forth would console me in ways that conventional religion failed to do. And it has helped. After my little brother Jeff, you were the greatest spiritual inspiration in my life. Your deep-trance channelings, which I (suspiciously at first, then more and more credulously) helped you attain with my guided meditations, changed my life completely. My entire spiritual world view has evolved from the talks you gave in your spirit-persona of  “Alexandra”, and I’m not the only one you helped by any means.

I can still recall clearly the sense of peace and nurture that flowed through your Alexandra persona to me and everyone else who attended our meetings in Key West, Florida, Ireland, and later Santa Fe, New Mexico, where you died. And I can recall vividly that the morning I found you, the moment I put my hand on your doorknob at 10am to rouse you for a meeting with a client we had scheduled for 11, I knew you were dead. I opened the door, saw you on the bed, and felt you and Alexandra—not the same person, but two personas—”floating” near the ceiling, witnessing me. I’ve had spiritual experiences since then, several in which I caught a glimpse of that Heaven of Light and Sound which made you so blissful whenever you tranced. But the experience I had that morning was my Lightning-Struck Tower.

Thank you for all you gave me. Thank you for my sense of your continuing presence in my life. I have loved other men since I met you, but you remain uniquely precious.

P.S. Please watch over my cat, and help me release him to the arms of Love when it comes his time to rise. • 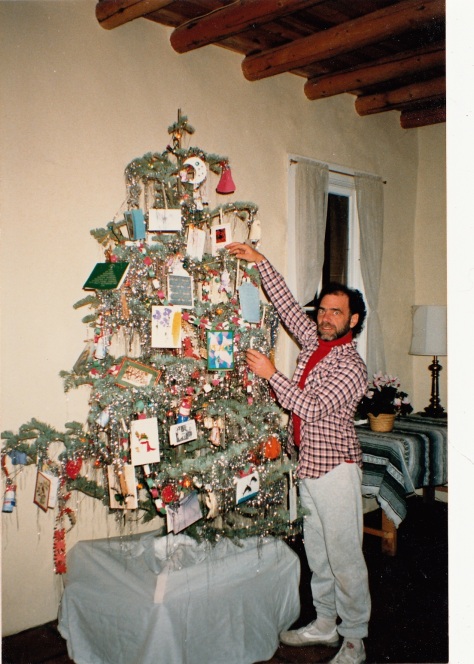 3 thoughts on “A Love Letter To Alex, On the Anniversary of His Suicide”